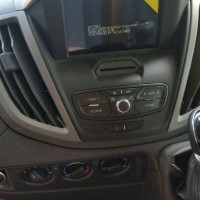 The days at sea are becoming very routine. Breakfast, lunch, ukulele class and dinner provide the main framework around which we fit in our other activities.

The gym is well equipped, and heavily used. Late afternoon seems to be the best time to work out when there are fewer people there.

On this leg we dined at La Mer French restaurant. The service and the food were top stuff, and our table was located with a view of the sunset and electrical activity in the clouds.

We started with cocktails, bread, and welcome dishes of polenta chips and olives stuffed with goat cheese. For entrée, we had a lobster bisque with a pastry top, and tortellini stuffed with wild mushrooms and snails in a green sauce. The lobster bisque was wonderful. For mains, we had duck breast in a tasty gravy, and jumbo scallops with more of the green sauce. Both were excellent. Dessert was a beautifully presented chocolate tart and a very light mousse, and again, these were delicious. Ian wanted to taste the French beer, but this was no longer available. Instead, we had a bottle of Yalumba Y Series Viognier 2016, which was full of flavour that went well with the rich food.

After our French meal, we had an early night and in bed enjoyed the latest doggie movie—A Dog’s Way Home. This is based on a book by W. Bruce Cameron, who also wrote A Dog’s Purpose, which we read last year, and which was also the basis of a movie.

On the day on which we were to cross the equator from the southern into the northern hemisphere, the ship had a Crossing of the Equator ceremony. This involved the ship’s First Officer, the Cruise Director, Neptune (King of the Sea) and his wife, Queen Double-D. Several dozen pollywogs who had not yet crossed the equator were put on trial for various trumped up charges. Of course, they were all found guilty, and sentenced to be covered in spaghetti and several differently coloured sauces. This all took place in the raised area between the two pools. As was to be expected, some food ended up in the pools, that were then closed for a day to enable cleaning. After the food splattering, the pollywogs were deemed to be shellbacks. The First Officer and the Cruise Director were both thrown in the pools, and the King and Queen escaped relatively unscathed by the experience.

We actually crossed the equator at sunset, about 8:00 pm. And a spectacular sunset it was.

We spent much of this leg practising the ukulele, either in our cabin, in a corner of a bar, or at Eric’s ukulele classes. This was becoming a Ukulele Cruise. Eric announced that we would be giving a concert on the day before we arrive in Singapore, and this spurred us on to even greater devotion. On the afternoon of the concert, there was much nervous tension. We performed in the Piazza, in the centre of the ship. The audience was spread on three levels. We had to stand, and thankfully had some music stands to put our music on. Over the Rainbow was a big hit with the crowd, and we followed up with Yellow Submarine, Brown Eyed Girl and Down on the Corner. For an encore we played Can’t Help Falling in Love. I think we did really well, considering that many people had not played a ukulele before. We did it, and felt both proud of our achievements and greatly relieved. The whole concert was recorded on the Reflections DVD produced on the cruise.

3 thoughts on “On Board the Majestic Princess: Darwin to Singapore”