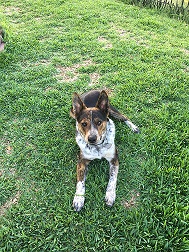 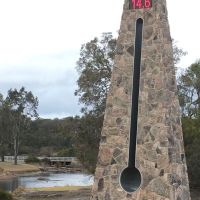 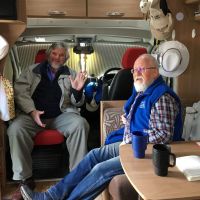 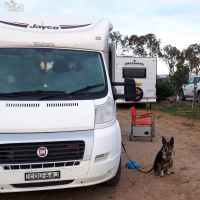 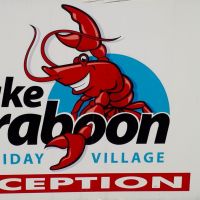 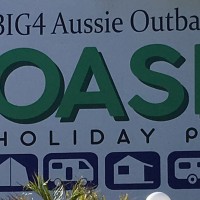 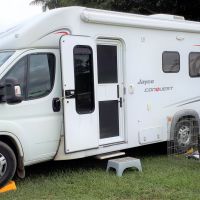 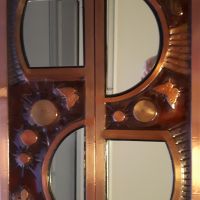 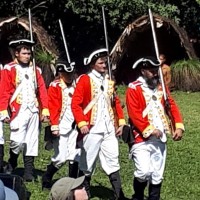 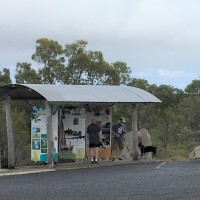 The first time we stayed in Tamworth was just before Christmas last year (2018). We had one night at the dog friendly Austin Tourist Park, which we liked, before walking the Tamworth Park Run. We have booked a cabin at the same place for several nights for the Tamworth Country Music Festival next January, and we intend to share it with our friends from Werribee, Barry and Sophia. We were keen to have a look at the cabin, or a similar one, if possible on this trip. We had booked a powered site for Monday night. The lady who took our booking suggested that, as we were traveling south along the New England Highway from Queensland, we should stop in at the Tenterfield Bakery.

So, we found a parking spot in a side street in Tenterfield for Katie and Dexter to wait while Ian checked out the bakery. There was a much wider range than usual on offer at this bakery, which explains why it was recommended to us. Ian bought apple slices for morning tea, interesting onion and salt bagels for lunch, and Turkish bread for tomorrow at home.

We drove out of Tenterfield, and stopped at an Apex Park in Deepwater to enjoy our delicious apple slices with spray cream for morning tea. Lunch was had at the Mother of Ducks free camping area in Guyra—ham and salad bagels and a cup of tea. We also emptied our toilet using the CMCA sponsored dump point at the camping area.

We arrived at the Austin Tourist Park around 3:30 pm. We were lucky to be able to inspect the actual cabin we have booked for the Country Music Festival. It has two bedrooms with double beds and one bedroom with two single beds, a bathroom with a toilet and a separate toilet, a well appointed kitchen, a lounge room with TV and sofa, and a table and chairs on the front deck. And it has air conditioning, which is essential in Tamworth in January. We should be comfortable!

Katie shouted out last dinner for the trip at the Nan Ping Chinese Restaurant in Peel Street. Katie ordered her favourite, chicken and cashews, while Ian ordered Mongolian lamb, as usual. The service was fast and the food was good. We ended up with leftovers from both dishes for the next day.

We watched our last Monday night Q&A in Matilda for a while.

At 4:30 am on Tuesday morning, the temperature in Matilda was 12 degrees, so for the third morning in a row, we put on the heater. We had a substantial breakfast so that we could drive straight through to home in 3 hours.

We had a brief rest stop at the Vietnam War Memorial at Muswellbrook, and we arrived home at The Sanctuary at 1:15 pm. We had our Chinese leftovers for lunch—lovely. Our house sitter, Isaac, had moved out, but his mother had made us some pumpkin soup from a pumpkin out of our own garden. We enjoyed the soup with Tenterfield Bakery Turkish bread for dinner.

In the afternoon we started unpacking Matilda. We wanted to start washing all of the clothes that we had taken away, but our washing machine, which was playing up just before we left home, had finally died. While Ian researched washing machines, Katie was lucky to get an emergency appointment to have her hair tended to late in the afternoon.

Dexter was very happy to be home, and immediately ran around the backyard collecting sticks. On inspection around the house and the yard, we were pleased that there were no major problems. Isaac had recently mowed the lawns, and the water tanks were full.

Ian relaxed with a glass of port from his port barrel in the evening. We were thankful and relieved to be home safe, after a trip full of happy and memorable adventures. We will write one more post to summarise our thoughts on our Cooktown road trip.