Ian did his morning walk just after sunrise as the Majestic Princess docked at a container wharf at Phu My. Our good friend, Felicia, comes from Ho Chi Minh City, and we hosted her, her husband Nick, and her parents on the night before we left on the cruise. We were eagerly looking forward to experiencing this interesting place, including trying some of its distinctive cuisine.

We had booked the “Do Ho Chi Minh City On Your Own” tour, which involved a 90 minute coach ride into the city, and the return trip in the afternoon. Meanwhile, Peter and Krystyna had arranged a guide to take them around the main attractions in the city, and they invited us to join them and shared the cost.

Arrangements for leaving the ship and getting onto our coach were not as smooth as we had experienced on the Sun Princess. We had tickets that required us to meet at the Princess Theatre at 8:25 am, with instructions not to get there early. However, when we got there only a couple of minutes early, we were directed to the end of a long queue that delayed us for 10 minutes. We then had to wait in the theatre until 9:00 am, so we did not get away until over two hours after docking.

Our city guide, Tin Tin, was also on one of the coaches. However, we were not able to get on the same coach. The trip from Phu My to Ho Chi Minh City involved several tollgates, but the traffic was not too bad. We passed lots of small businesses, including cafes, that were on the main road. We also passed dry rice fields and wet rice paddies. Presumably the wet paddies are being affected by saltwater, which prevents rice from growing. Some of them are presumably now being used for aquaculture. We were told that where we see water palms, it is too salty for rice.

We ended up being dropped off outside the Grand Hotel in the centre of Ho Chi Minh City, which is still commonly called Saigon. After using the hotel’s rest rooms, we were met by Tin Tin, who had been dropped off at the Rex Hotel nearby.

We viewed Times Square Saigon, a 6-star hotel across the road with lovely polished blueschist facies metamorphic rocks in the foyer, and then walked up to the Notre Dame Cathedral and the Post Office. We learned to walk slowly, but confidently across the roads. Somehow, the taxis, motor scooters and bicycles allow for pedestrians who follow this approach, and we did not see any accidents. Unfortunately for Katie, the cathedral was closed for renovation. Peter and Krystyna bought T-shirts and purses from street vendors, and they seemed to enjoy the bargaining process (which Ian detests).

In the above photo of street vendors, look closely at the old building in front of the new building in the background. This is the subject of a very famous photograph taken on 29 April 1975 of a helicopter on top of the Pittman Apartments evacuating refugees. The iconic photograph (from https://www.cia.gov/news-information/featured-story-archive/2015-featured-story-archive/the-last-days-in-saigon.html) is reproduced below:

The Vinasun taxis were reliable and clean, but Peter and Ian had to shoehorn their way into the third row of seats, which were designed for children. Scooters were everywhere.

We all got into a taxi and drove to the War Remnant Museum. This museum was amazing and told the stories of the struggles with the French occupation of Vietnam, and the 17-year war with the USA. The latter war was portrayed by the Australian Government at the time as an honourable attempt to keep the communist regime in the north from taking over the southern part of the country. It appears, however, that the regime in the south was far from a competent and benevolent government, despite being anti-communist and backed by the USA and its allies. Of course, history knows that the USA lost, despite the widespread use of dioxin on the local people, or agent orange, and the communists took over the whole country. Vietnam has done relatively well since then, especially since President Clinton removed sanctions imposed by the USA. We were fortunate to have Tin Tin introduce us to one of her friends who is a third-generation victim of agent orange. Presumably, many US servicemen were also affected by this poison. It appears that the last Vietnam war was a disastrous mistake made be the Americans, and Australia perpetuated the mistake. History repeated itself several decades later when the USA, aided again by Australia, invaded Iraq on the pretence of the need to destroy weapons of mass destruction.

We could have easily spent the best part of the day in the war museum, but we had specifically asked Tin Tin for an opportunity to eat some local food. We took a taxi to the Quan Bui restaurant, which is very close to Tin Tin’s university. Tin Tin ordered soup, pork, chicken, vegie dishes and salad. A passionfruit with warm custard was an interesting dessert. Peter and Ian enjoyed a couple of Saigon beers.

After lunch, we took another taxi to the Bitexco Financial Tower, which is distinguished by a helicopter pad and is one of the world’s iconic buildings. There is a 360-degree observation deck around the 49th floor called Skydeck. Peter and Ian were the only ones interested in venturing upwards, and we had a good view of most of Ho Chi Minh City, especially of the Saigon River. 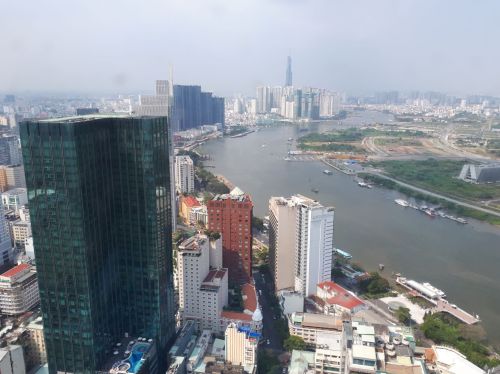 Tin Tin left us while Peter and Ian were on the Skydeck, as she had to get back to her rendezvous with her coach. We walked back to the Grand Hotel, and Ian and Peter managed to have another Saigon beer before our coach arrived. The drive back to our ship at Phu My was smooth, and we arrived back on deck right at 5:30 pm, which was the time for all passengers to be back on board.

We were exhausted but elated after a fabulous experience in Ho Chi Minh City. We finished the day with a birthday dinner with new friends John and Joy from Bowen in Queensland. John was 72 today.

Ho Chi Minh City, or Saigon, was incredibly fascinating, but we only tasted a tiny sample of Vietnam. We want to understand more of the history of turmoil in this country. It would also be good to see more of the countryside away from the urban pollution. John and Joy, and others that we met on the ship, went on an enjoyable tour of the Mekong Delta where a huge range of tropical fruit is grown, as well as the ubiquitous rice. As Vietnam has a long coast, fishing is also a major industry here. Hopefully we can come back and see some other aspects of Vietnamese culture, maybe with our friend, Felicia.